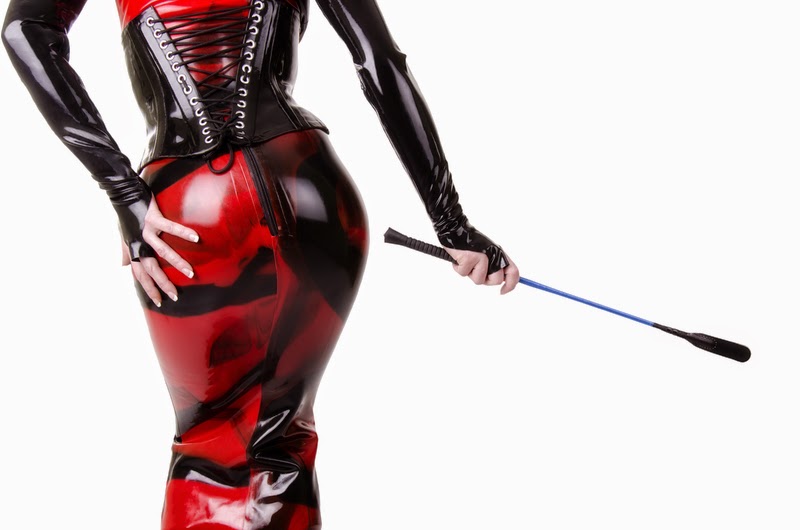 I'm part of a secret project with eight other sexy authors, but today I'm giving you a glimpse inside the pages. I can't tell you much, but I will say that my story in this collection is the beginning of a series I'll be doing in 2015 about a coven--three sisters--who have 'respectable jobs by day' but own a sex den by night. Witches…BDSM…how fun!

This secret project releases in early November, but I've never been good at keeping my lips sealed.

Here's one scene where my characters are, shall we say, getting acquainted.


Mistress M stepped out of the darkness. Ebony hair cascaded past her shoulders, bare breasts showcased by a leather bustier that kept them pert and separated by a diamond studded strap that wound around her shoulders like a halter. Emerald green eyes peered at him from behind a leather mask as she strode slowly toward him, long legs encased in boots that went to mid thigh, high-heels clicking ominously on the floor, and a crop dangling loosely from her fingers.
He touched fingertips to the matching collar he'd been instructed to wear and felt his cock tingling in response. He belonged to this exotic woman for the night. Knowing that eased his doubts.
"Stand up and take off your robe, pet. I want to see you," she instructed as she moved in a slow circle around him.
He stood slowly, not sure what to say, and undid the sash at his waist. When the satin material slid off his body, he felt the tip of the crop slide up his spine. He held his breath, unsure what to say or do despite the lengthy instructions he'd read prior to signing the agreement.
"You're missing something." Her hot breath slid against the skin beneath his ear. "Are you already disobeying me?"
Smack. The blow to his ass made him cry out with both surprise and pain.
"No, I—"
Smack went the crop against his tender backside.
"Address me as Mistress M or Mistress. Always."
"Yes, Mistress." He turned his head to look at her and was surprised to see her smiling at him.
"Do you know what you've forgotten yet?" she asked.
He looked into her eyes, fascinated by the intensity of their color and the confidence burning in them. He glanced down at the bondage belt he'd been instructed to put on but had forgotten while caught up in the troubling thoughts torturing his mind.
He reached for it while she watched, more excited than he'd imagined he could be when he'd first stepped into the room. He placed the belt around his waist while his cock rose to the moment. He knew the rules, no actual intercourse, but when he noticed her bare ass exposed by the leather thong, he couldn't help but wish their roles were reversed.
"You're thinking of all the lovely things you could do to me aren't you, pet? Well," she poked him in the center of his chest with the crop, slid it up his throat, and used it to tilt his chin up until they looked at each other eye-to-eye, "I'm not a whore."
"I know—"
"What did you say?" Gloved fingers gripped his jaw and held him firm.
"Mistress, I'm sorry."
"Get on the table."
He complied, the cool of the wood against his back awkward as his long legs dangled over the edge while his cock pointed at the ceiling, the air teasing the tip. He hid his surprise when shackles clasped his ankles against the table, his legs spread wide. She grabbed one of his hands, kissed his the inside of his wrist, and snapped handcuffs on him. She repeated the process with his other hand, her kiss warm on his skin, almost gentle. When he tried to arch his back to accommodate the uncomfortable position, she secured clamps to the belt at his waist and held him firm.
Her nipples teased the hair on his chest when she leaned over him and looked into his eyes. "Do you trust me?"


"Yes, Mistress, I do." And he did. Maybe it was the way she looked at him from behind the mask, but he felt like he knew her, that she wasn't as anonymous as she'd like him to believe.

Shh…don't tell anyone I shared a snippet. Stay tuned for more in November!