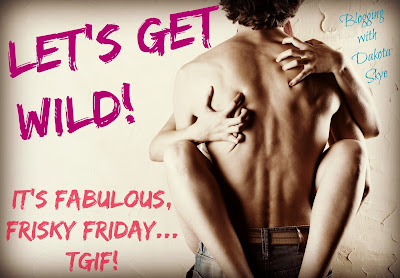 Ooo...it's that time of the week again! We're shaking off the blahs from the week and preparing to indulge our wild side for the weekend. Today on Frisky Friday, we're checking out Pandora Spocks' upcoming new release, For Sparrow. Pre-order now, don't delay! Check it out below. 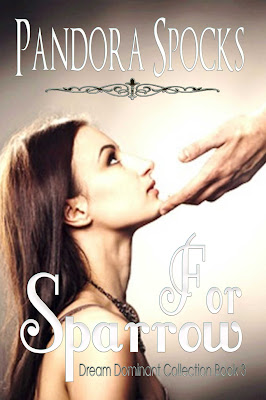 When Jessi Crenshaw’s husband Graham dies unexpectedly, she’s devastated.  He’s the only man she’s ever loved.  Just eighteen when she met him, she’s been married to him for twenty-five years.  Now she’s lost her friend, her lover…and her Dominant.

But as it turns out, Graham had an inkling that his health was in decline, and he tapped his friend and protégé in the Lifestyle, firefighter and paramedic Judd Farris, to be Jessi’s Dominant until she gets back on her feet.

Judd is determined to fulfill his promise to his friend.  But it’s a damn odd arrangement—a platonic Dom/sub relationship.  With her fiery auburn hair, sparkling green eyes, and audacious spirit, Jessi captured his attention the first time he ever saw her.  At her husband’s funeral.
A man could go to hell for the things he’s been thinking.  But they’ve drawn a line, and he’s going to stick to it.

Judd’s sexy good looks and his gentle confidence aren’t lost on Jessi.  She’s torn between loyalty to the man she loved, and desire for the man increasingly in her fantasies.  In the letter Graham left for her, he mentioned that she might find Judd attractive.  But that’s simply ridiculous.  He’s five years younger than she is.  He couldn’t possibly be interested in her.  Could he?

Judd’s a Dom without a sub, and Jessi’s a sub without a Dom.  It’s perfect for the time being.  Could it be that Graham had more in mind than merely a temporary solution?

And could it all end at the hands of a madman?

Flickering candlelight greeted them as they entered the bedroom, and Jessi saw various implements lined up on the bed.  She looked to Judd.

“I wanted to create the right mood, Angel.  Candles seemed the way to go.”

Slowly she approached the bed and lightly fingered what she saw there--a black leather crop, a rectangular paddle also of black leather, a black suede flogger, and a wooden spoon.  Judd stepped beside her and slid off his black leather belt, adding it to the assortment.

When she turned to him, his expression was bemused.  “Told you I went shopping,” he laughed.  “Now, you’ve been such a good girl, I’m going to let you choose what I’m using to spank you with tonight.  So what will it be?”  He stepped back and folded his arms across his chest, waiting to see her response.

Jessi blinked and looked back to the items on the bed.  Her head spun with possibilities, but suddenly she knew the answer.  Dropping to her knees, she grasped her wrists behind her back and bowed her head.  “Whichever one would please you, Sir.”

“Angel, you please me more than I can say.”  He stroked her hair lovingly, then removed his shirt, tossing it into the bathroom.

“I think…”  He reached down to help her stand, tugging at the dress gathered around her waist to pull it the rest of the way down.  “I think we’ll get the biggest bang for our buck…or your butt,” he grinned, “with the paddle.  I want you to stand at the end of the bed and lean over.”

Jessi complied, resting her torso on the bed, her head turned toward the slider overlooking the beach and the ocean beyond.  In the dim light, she could also see herself, naked and bent over the end of the bed, reflected in the white sheer-shrouded glass.  Her expression was wanton, needy.  And she felt immensely happy.

Judd smoothed his hand over her bare bottom, pausing to tweak the plug.  Jessi gasped at the sensation and felt the need in her core grow.  She yelped when the first smack surprised her, but after that, she gave herself over to the sensations, the whack on her cheeks, the vibration in her ass, the tingle in her pussy.

At some point, Judd put down the paddle and used his hands to smooth away the sting.  “Up on the bed and on your knees, Angel.”

Jessi complied, and he turned her to face the bank of glass.  “Head up.  I want you to watch as I fuck your cunt.”

She gasped, her eyes meeting his in the reflection as he impaled her with no further preamble.  He pounded into her, all the while fidgeting with the red-jeweled flange of the butt plug.  Jessi felt a release of fluid she was powerless to stop.

Needing no further encouragement, Jessi cried out as ecstasy overtook her, starting in her drenched core and radiating throughout her body.

“Good girl,” Judd murmured as her shuddering subsided.  He leaned forward to kiss her shoulder.  “But we’re not done quite yet.  I’m still taking your ass tonight.”

Gently, he helped her down to her belly and slid her to the edge of the bed so that her feet rested on the floor.  Using his foot, he pushed her feet wide, and he carefully removed the butt plug, wrapping it in a waiting towel.  “What’s your color, Angel?”

Next, Jessi felt a cool dollop of lube at the top of her crack and Judd massaged it around the hole the plug had vacated.  That was followed by the pressure of Judd’s cock pushing at her entrance.  “Breathe, Angel.  Just relax and breathe.”

Jessi did just that, closing her eyes and focusing on the renewed sensation in her pussy as Judd pushed his way into her back hole.  When his head pushed past her taut ring, he stopped, giving her a chance to acclimate before he pushed forward.

Jessi raised her head, seeking out his eyes in the glass door.  She watched as he slowly pushed himself in to the root, and she saw his chest hitch as he forced himself to hold still again.  At the question in his eyes, she nodded, and he gave her the full force of him, withdrawing abruptly, then slamming back into her, pounding her tight passage.  He pulled her to her knees to gain better purchase, his balls slapping against her clit with every charge, and she felt her moment building again.

“Come with me, Jessi.  I want us to come together,” he grunted, as he released himself for the second time that night.

Jessi saw sparks and screamed out her pleasure, continuing to shake as he slid from her grasp and collapsed onto the bed.  Judd gathered her to himself, wrapping her in his arms as they both gasped for air.  She snuggled in to his chest and he lightly kissed her temple.  “I’m yours,” she whispered. 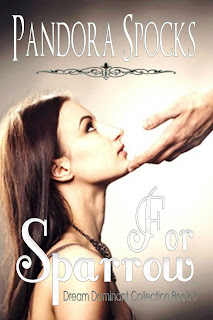 Pandora Spocks is a sassy ginger and hopeless romantic, living her happily ever after in South Florida.

Pandora has had stories pinballing around in her head for years. At one point, she spent hours daydreaming in Mrs. Howe's ninth grade algebra class. She didn't learn much algebra, but she had some really good ideas. Recently she decided to try her hand at sharing those stories with others.

Pandora is currently at work on her next spicy romance.